20-Year 421a Tax Abatement. Closings Have Commenced. This south-facing three-bedroom, three-bathroom residence is bathed in light with expansive floor-to-ceiling windows...

The Park Belvedere was originally developed by the Zeckandorf family in 1985, who have been in the real estate business for two or three generations. This red brick building, which soars over the surrounding brownstones, gives the apartments spectacular views of the Museum of Natural History, Central Park and the Hudson river. 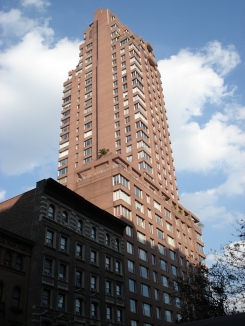 The Zeckandorf family has also developed numerous other buildings, including,  but not limited to, World Wide Plaza, Zeckandorf Towers in Union Square and most recently, the spectacular 15 Central Park West. At this writing, they are also working on a project in the United Nations area and Gramercy Park.

This luxury doorman building located across from the Museum of Natural History on the historic Upper West Side of Manhattan has open city and Central Park Views. Near all the great restaurants and transportation this building has spectacular views of the Museum and the Planetarium which glows at night.

The building is located near Central Park, Riverside Park, and some of the famous Upper West Side grocery stores like Citerella, and Zabars.  Also right down the street on Broadway is Filenes Basment, Syms Clothing and The Apthorp condominium and The Harrison Condominium.