Amazing views of the Empire State Building, the Chrysler Building, and the Freedom Tower from this magnificent 3 bedroom, 3.5 bath residence, which is available for rent ...

Residence #32AE at 845 United Nations Plaza, a combination of two of the most sought-after lines in the building, is truly one of the most spectacular and well-appointed ...

A rare opportunity to own a breathtaking residence in the sky! This luxurious 3 bedroom and 3 bathroom, or 2 bedroom with an office/den, loft-like home spans 2476-sqft an...

RENOVATED WITH A GREAT UPGRADES THROUGH OUT THIS GORGEOUS 2BR APT. 800 feet high above midtown Manhattan, world looks different from this lavish apartment. This designe...

SIMPLY ONE OF A KIND! This brilliantly combined, reconfigured and renovated apartment is the only two bedroom, two-and-a-half bathroom unit in the building with all rooms...

Rare opportunity to own a high floor, two bedroom E line apartment with spectacular views of the City and East River! Open the door to this generously spaced corner apar...

WHY COMPROMISE live in this corner luxury 3 bedroom 3 bathroom home. Entrance foyer leads to a large living room with floor-to-ceiling windows and unobstructed views of t...

This stunning black glass tower was built by Donald Trump around 1988 and incorporated then as well. With breathtaking views of the UN Building, the East River, The Empire State building and, the Chrysler building, there no doubt that this condominium is the cream of the crop in the United Nations area.  There are all of the servcies you would expect from a world class Trump building including a 24 hour doorman, concierge, a healthclub with pool, a garage, and storage. There is a large courtyard and a live in super. Renting is allowed in the building, as well as pets and washers and dryers in the apartments too. 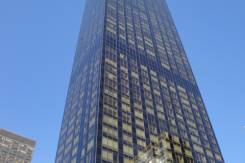 The luxurious apartments are grand in size and have spectacular views

The apartments, many of which have been renovated, have spectacular views of the city, the UN Park, or the surrounding buildings as mentioned earlier, The Empire State Building and the Chrysler Building. All of the apartments have wood floors, some marble floors, floor to ceiling windows,  and gourmet kitchens and baths. There are top of the line appliances that include Bosh, Viking, Sub Zero and Meile to mention a few depending on the apartment. Many of the units have soaring 16 foot ceilings, with spectacular views. Apartments range from 500 to 5000 square feet in size and are magnificent.

The location of The Trump World Tower is very convenient to The United Nations, FDR Highway, Grand Central, and easy access to the Theater District, Times Square, Madame Tassauds, and some spectacular shopping on Madison and 5th Avenues. Only a cab ride to Soho, Tribeca and Central Park makes 845 United Nations Plaza a great place to live.