Trump International Hotel And Tower is a spectacular luxury condominium and hotel that was created  in 1996 from an office tower that was formally the GM building. The GM building was suffering from huge structural issues and needed a complete overhaul when Donald Trump bought the building.  The renovation included a completely new skin to the building, along with the total renovation of the interior structure.  The apartments are grand in size and have luxury gourmet kitchens and marble baths. There are high ceilings as are common with a lot of commercial conversions into residential buildings. The floor to ceiling windows also afford spectacular views of  Central Park and the surrounding area. 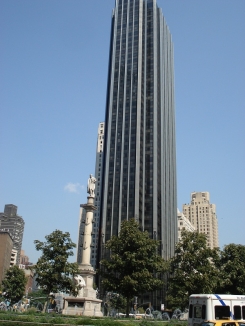 In addition to the spectacular finishes that are included in the condominium units, there are hotel services available to the units and a spectacular restaurant downstairs called Jean Georges for all of your fine dining.

Right across from Central Park, and at the beginning of the Upper West Side the location could not be better.  In a similar statement, Trump designed a world class silver globe outside of his building to mark the location. The views from the Trump Tower are first class as are the fixtures and amenities. There are a total of 166 units on 52 floors, originally built in 1966.

Many of the usual Trump touches are present in this building.  An ornate lobby, lots of gold fixtures, a polished staff, and tremendous location at the beginning of the Upper West Side.

Just across the street is the amazing Time Warner Center with all of its amazing shops, and restaurants. The Time Warner center is also know for it's two famous addresses and spectacular apartments as well. 80 Columbus Circle and 25 Columbus Circle. These are luxury condominiums that are seldom matched in views, location and size.  The Trump international Hotel and Tower however still holds its own in this illustrious company.  Not to mention that just north of the Trump building is the now world famous 15 Central Park West, with its high prewar style ceilings and floor to ceiling windows.