was developed by The Millennium Partners

This 32 story building was developed by Christopher Jeffries, Philip Aarons and Philip H. Lovett. It was designed by Gary Handel & Associates. The developers also put up two other buildings in the same area of Lincoln Square.The building was completed  in 1996 and has an extended stay hotel called the Phillips Club. The units are designed for extended stay. 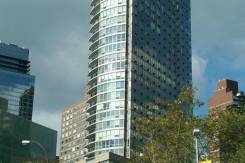 The Grand Millennium Condominum has a Prime Lincoln Center location

Prime Lincoln Center luxury condominium on the trendy Upper West Side near all the great shopping and restaurants and the Sony Movie theater. It is directly across the street from the Reebock Gym and of course, near Starbucks.

It's a tall glass enclosed building with top of the line finishes. Its sister building, the Park Millennium houses the Reebock Gym, a AMC movie theater plus numerous other shops.