The epitome of elegance, this stylish 4 bedroom, 6 and a half bath condominium with a huge terrace in the sought-after Trump Park Avenue was designed for luxurious comfor...

Enjoy truly gracious living in one of New York's most coveted addresses, 502 Park Avenue. Once home to the famed Hotel Delmonico, 502 was converted into modern luxury con...

Enjoy truly gracious living in one of New York City's most coveted addresses 502 Park Ave. Once home to the famed Hotel Delmonico, 502 was converted into modern luxury co...

This luxurious 1 bedroom residence is located in one of Manhattan's most desirable neighborhoods in a classic Park Avenue pre-war condominium. No detail of this home was ...

Occupying the city&#39;s most coveted address at Park Avenue and 59th Street, this extraordinary pre-war condominium unifies the timeless elegance that is Park Avenue wit...

Trump Park Avenue is located in a building that has been around for a while and through many trials and tribulations.

The original building was designed back in 1929 by the architectural firm Goldner and Goldner at a cost back then of about $5 million dollars. 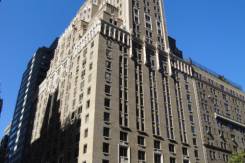 Since then, however, the building has been sold a number of times, has been a hotel, a co-op and now finally a condominium. It's name has also changed numerous times. First it was the Viceroy Hotel, then the Cromwell Arms and then Dominico's (named after the restaurant in the building).

In 2002 Donald Trump bought the building for a mere $155 Million dollars and converted it to condominiums-spending about $80 million dollars for the renovation.

In describing of Trump Park Avenue one should always start right with the individual units and their classically spacious layouts.

Costas Kondylis, a prominent architect long associated with luxury interiors, designed the apartments to maintain the pre-war aesthetic of the area by designing elegant apartment homes.

Larger units can be found on the 3rd & 4th floors & gracious 1 & 2 BRs will occupy the 5th thru 19th floors. Starting on the 16th floor there is a setback & then another on the 18th floor. Some of the units on those floors have terraces.

Beginning on the 20th floor, residential units occupy full floors & range in size between approx 4,000 sf to 7,000 sf. Many of these one of a kind units will feature terraces as well. The 31st & 32nd floors will house the exclusive duplex Penthouse. Built for the 21st century, Trump Park Ave will include cutting edge appliances & amenities, while still maintaining its traditionally tasteful environment.