Stunning views are yours from this high floor meticulously renovated one bedroom condominium. Move right into this spectacular residence, which was designed with the high...

Not a lot of apartments become available in this exclusive building. Located only steps from Lincoln Center and Juilliard, 45 West 67th is ideally located to benefit from the amazingly cultural environment that surrounds it. The building has a 24 hour doorman and concierge and is located right across and next to CBS studios. About half a block from Central Park and some of the most expensive real estate on the planet, this luxury condominium building has long been established and holds its value nicely. There is a laundry in the building, a super, and a basement with some storage. 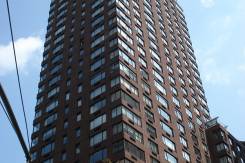 The building was built in 1984 and designed as a condominium. One of the earlier condominiums among a plethora of co-ops that were being converted at that time. The building was developed by legendary New York real estate developer and owner Daniel Brodsky. Mr. Brodsky has been a long time fixture and very well respected real estate entity in the New York market. This by no means was his first or last venture into the market. His architectural firm on this project was Schuman, Lichtenstein, Clamen and Efron.

Located a block from both Central Park and Lincoln Center , 45 West 67th is a 33 story red brick tower set on a low rise base on the Upper West Side

The Building has 172 apartments with some spectacular views of Central Park, Lincoln Center, and the roof tops of surrounding brownstones.  With spectacular restaurants like The Tavern on The Green, Jean Georges, and Picholine restaurant.

45 West 67th street was built in 1984 and has a nice lobby and is close to many new and established stores such as The Gap, Apple store, The Sony Multiplex, Best Buy, Chase Bank, Bed Bath and Beyond and Barnes and Noble.