Available to the public for first time, the expansive and private corner Penthouse 18/19A at 15 Central Park West is situated directly on Central Park at a perfect elevat...

15 CPW, PH43 is a meticulous work of art designed with the most discerning eye. The interiors of this never before offered residence were curated for the current and orig...

Penthouse 50A is a luxurious corner 4,500 square foot home that sits high atop the city with breathtaking panoramic views from three open exposures showcasing the entire ...

<b>THE BUILDING</b><br>Why is 15 Central Park West one of the most sought-after condominium buildings in New York? Because the Indiana limestone-clad facade building was ...

BACK ON MARKET. AN APARTMENT LIKE NO OTHER! A once in a lifetime opportunity to live in the San Remo in a sprawling corner residence of over 5,500-square-foot. 15EF is a...

A rare opportunity to live in the legendary Beresford along Central Park West on a high floor 8 room apartment with unparalleled panoramic views of the Fifth Avenue skyli...

This luxury cooperative was built in 1926 and has 75 apartments and 15 floors.  It was designed by Sugarman and Berger.  They also designed the White House cooperative on Central Park West. The building has storage and laundry in the basement and the apartments have Central Park Views and working wood burning fireplaces. There are multiple elevators, and thru the window air-conditioning is allowed. 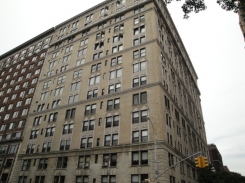 Shopping in the area

There is plenty of shopping on the Upper West Side that is close to 239 Central Park West. There is The Gap, Banana Republic, Coach, PC Richards, Syms, Filenes Basement, and Barnes and Noble.  In addition, in the Time Warner Condominium at Columbus Circle, there are many other shops like Hugo Boss, Pink Ties, Borders Bookstore, J Crew, and Tourneau.

There are plenty of world class restaurants on The Upper West Side as well. There is Carmines, which is near the building and then as you travel downtown, you can find Picholine, Bar Masa, Jean Georges, Per Se, and Landmarc. You can also find PJ Clarks, Avoce, and Le Boit on Bois.